There are cities and villages. What we call civilization. Then there are the Wastes. Beyond. Where the witches and wizards hide. Kings and Queens lead armies of flying war machines against each other from the safety of their castles. Bombing countrysides into ashy echoes. Soldiers with rifles and bayonets guide tanks down village streets, ready for war. This is the backdrop for the world, where Spellcasters hone their craft, probe the Wastes, and  try to make a difference before the Corruption creates monsters of them all.

The first edition of this game was released in June of 2020. It was my first excursion into printing book and shipping them from my house. I sold all of the 25 original print run copies within the month and TWATW still is one of my highest selling games to this day. With this second edition, I wanted to rewrite the text with clarity in mind. I may not have succeeded, but for fans of the original, this will prove to be a useful update, and for new folks looking to expand their TTRPG hobby, this will open avenues for you that you may not have thought were possible.

The Wizards and the Wastes is a game of arcane bargaining. Nominated "Most Innovative" for its unique spellcasting system, wherein you create spells from your personal spell source; a painting, a book, a collection of poems, a graphic novel, or an album.

You circle passages, lyrics, words, images, panels, and turn them into spells. Then you bargain for those spells using the various currencies the game chokeholds you with. Trading years of your life, insight, toxicity, and corruption to cast spells as you see fit. 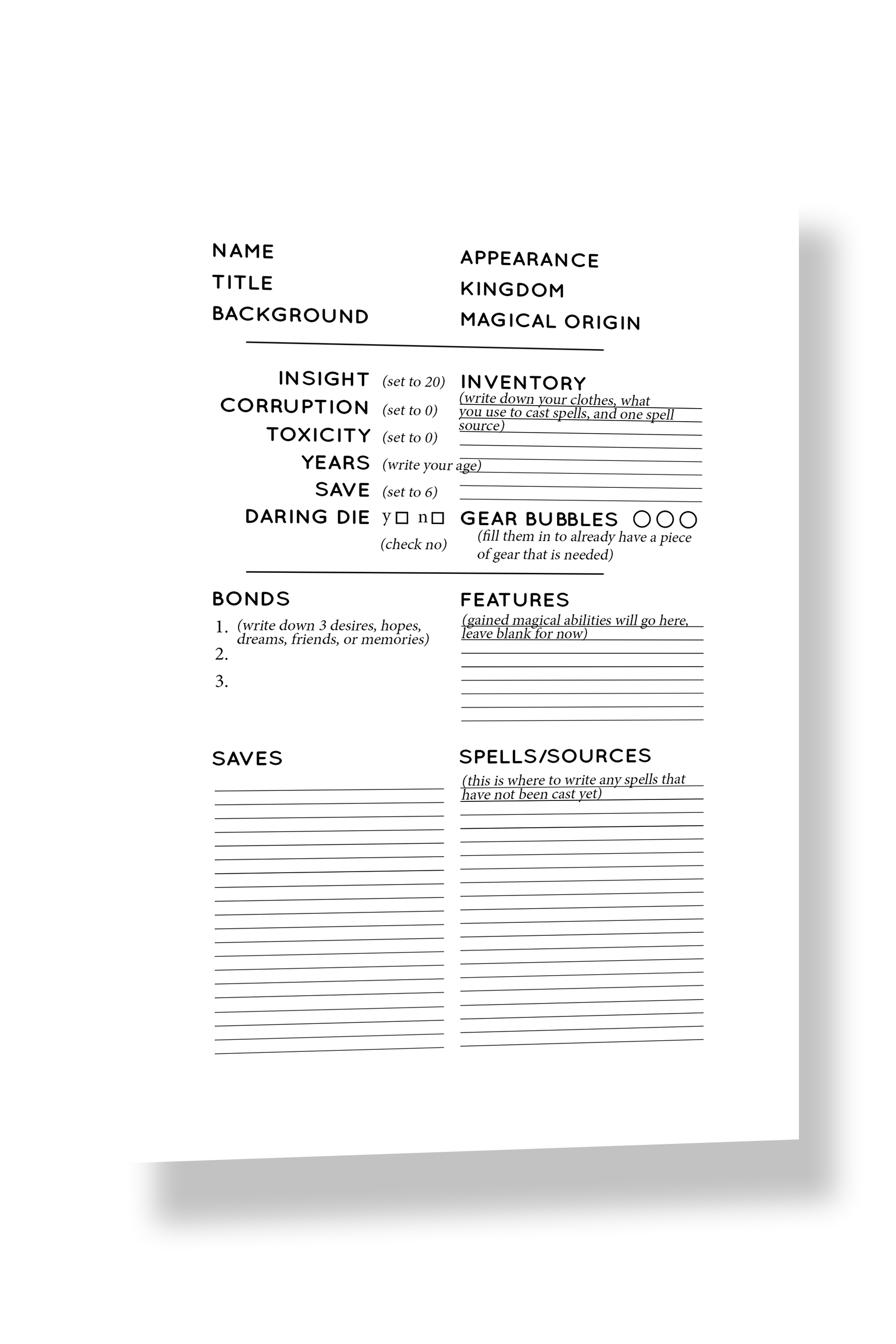 This is where the game lies. Taking its cues from the likes of Diplomacy, or social games like Werewolf or Among Us. The relationship between the people at the table could lead to rather adversarial bargaining, while, on the other hand, two friends might take it easier on one another.

The game features a unique Save System that builds your character through failures.

Whenever faced with a risky situation, the Spellcaster rolls a twenty-sided die (d20) and hopes to equal or get under their Save. If they succeed, they avoid any Harm. If they fail, they take the Harm and create a new Save named after the situation they were reacting to, and increase its number by 1.

The book is an expanded 112 pages, packed with picklists, charts, random tables, and tips for taking this idea from the book and turning it into a game at your table. Pick it up today.

John Battle (or Batts) is a queer, non-binary writer based in Chicago. John writes personal, artsy-fartsy games about the struggles of body image, acceptance, and queer identity. They are known for their work on .dungeon and My Body is a Cage. 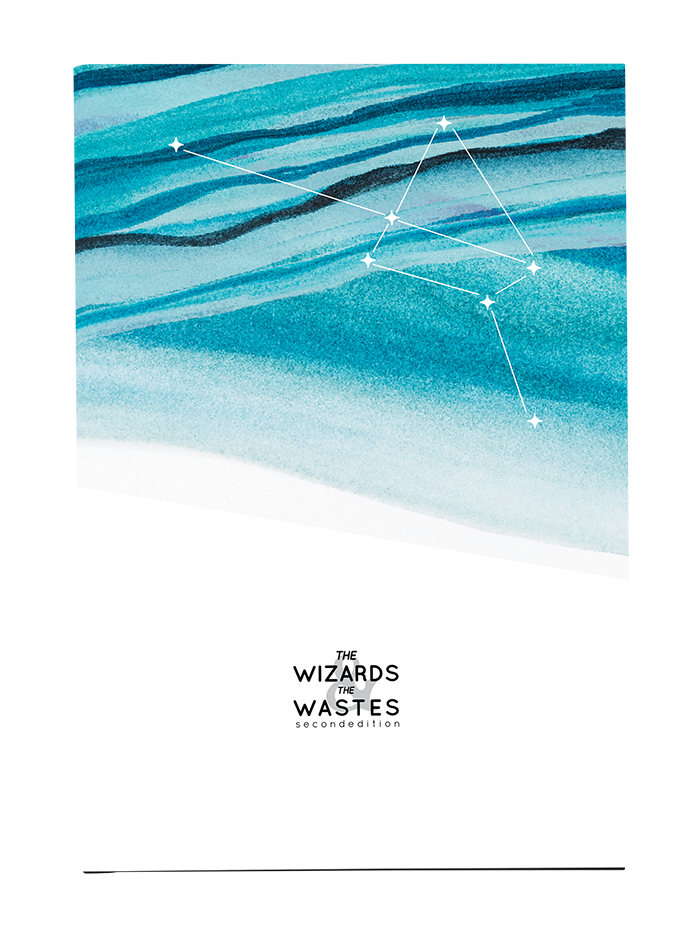 Pickup a physical copy by clicking the big image above!

In order to download this social magic game you must purchase it at or above the minimum price of $5 USD. You will get access to the following files:

Support this social magic game at or above a special price point to receive something exclusive.

If you are struggling with money due to the pandemic, or if you are Black, POC, or LGBTQIA+, I am offering a few community copies that you can take for free. Please take one and pay it forward with help to another person who might need it.

Just bought the first edition zine version at All The Problems In This World in Berlin, Germany. So, now I see there is a second edition. 😄 If it gets played I might have to upgrade!

it’s gorgeous and now I want to rethink my layout for all my books.

I bought this game here a little while back and I wanted to download it but I can't see where I can download what's going on?

Hey! We did a big update/crowdfunding in january and the new pdf will be finalized and uploaded here by the end of the month. There'll be an email that'll go out to let you know what's up.

I just ordered via the nerves website but got no confirmation email. How do I contact you all for assistance? Thank you <3

The shop hasn't been working since December...

Soul Muppet isn't my shop so there's nothing I can do. They only have copies of the first edition, the newest edition is only at nerves.store for now.

Oh, ok, thanks! Heading to nerves then :)

Is the only way to get a physical copy from your site? The shipping rates to Canada are brutal.

Right now, yeah. I hope to get some copies to Canadian stores after printing, but right now nothing is set.

Well, I caved and bought a physical copy. It's just too pretty, and I'm a sucker for pretty books. Looking forward to receiving it!

If I want both physical and pdf of the new version, what do I select to buy?

All purchases on nerves.store will get you a pdf

Will those of us who purchased the 1st edition still have access to the old edition? And can we buy the second edition just as a pdf to help with funding or specifically as a physical copy?

PDF sales go towards funding and you can select just a pdf.

Thanks for the clarification. Looking forward to the new edition

Is the PDF version of this not available anymore? Just wondering, since I purchased it a few months ago! Thanks!

It'll be available again when the crowdfunding is complete. Doing final edits and such on the new edition and then will update the page.

So can I just clarify: I just purchased the PDF (on the 11th of Feb 2022) is there a rough estimate of when I'll be able to receive that?
Pretty excited to read over this! :)

Probably sometime in March. Currently prepping for a move.

Thanks for the heads up! All the best!

Any update on the release of the PDF?

This month! Most likely towards the end of this week.

Sorry if I'm being really clueless; does this game have a GM and a preferred number of players? And am I good with just a regular set of polyhedral dice or are there any other items I need to play?

You don't really need dice, it's just recommended to have d20's to use as counters. You can play with any number of players and a GM if you want to. The game assumes you'll use the tables in the book to generate problems and negotiate with a GM to solve them.

Hey just popping in to see about some sweet sweet physical copies :) I would love one!

Me too, add me to the list (again) although now probably isn't the best timing.

Hey Batts, this game is wonderful like all of your work, but could you add some alt text to the images in the game description?

I have no idea how. Is that where, when you hover the mouse over an image there's a description?

This game is fantastic in flavor and mechanics. Its now one of my favorites!

I'm down for a physical copy if you want to expand your print order.

I'm working with a distributor to expand the print run. I'll have more info on it soon I hope!

This is fantastic. I love the way you choose your spell source. I would love to buy a print copy if you can find a way for shipment to the EU.

This game is on point. Takes a lot of the great innovative features of 6e, marries them with a unique, dynamic, creative way of bringing magic and spells to your game, and mixes that with a mysterious war-ridden world ala Howl's Moving Castle to make a really fascinating RPG.

There is such cool stuff going on in the text and layout too... I won't spoil it for anyone but more than a few times I'd flip a page and see something so evocative and flavorful without being a huge lore text and it made my jaw drop

can you add some community copies 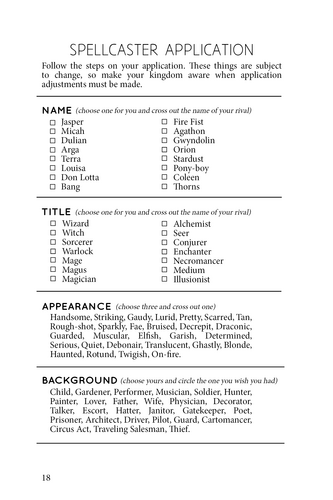 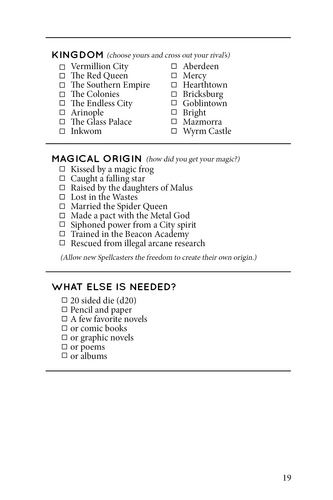 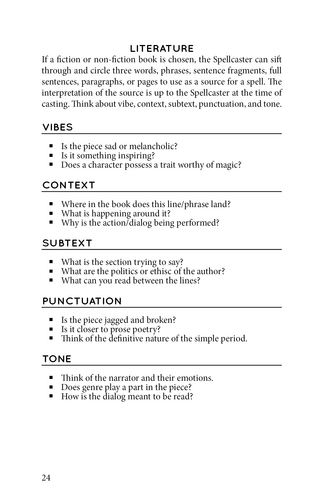 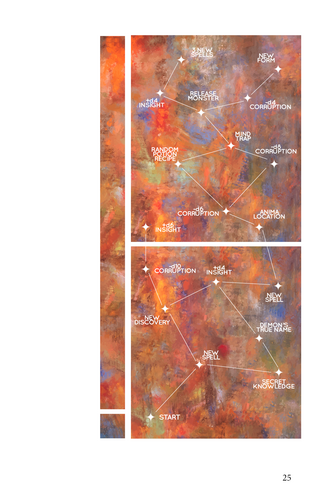 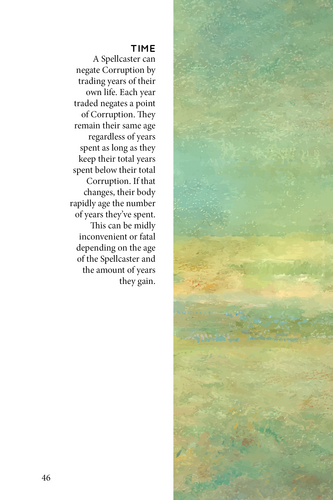 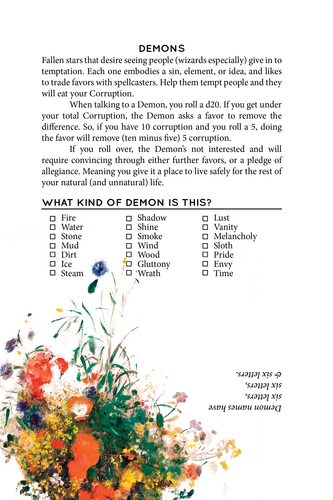 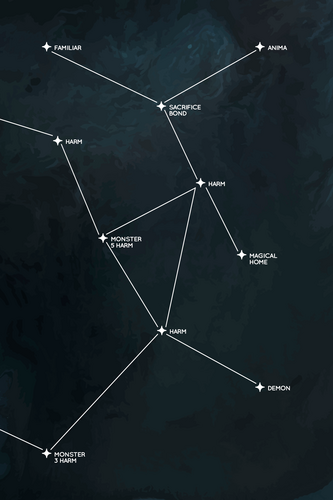 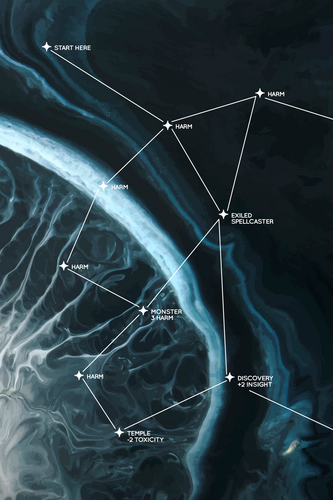