GO TO NERVES.STORE TO GRAB PHYSICAL COPIES! BUT ONLY FOR THE NEXT THREE DAYS!!

This is an unofficial Pokémon dungeon crawler. You play as a Pokémon in a world after humans. You get a dungeon delving class (cleric, fighter, magic-user), you get a backpack, a weapon, and you head out on an adventure.

This game plays similar to OSR-style games with a d20, roll-under system. Most rolls are player-facing; Players roll to attack and to dodge while the Game Master uses dice to keep track of the various complexities of dungeon crawling.

As of now there are 20 playable Pokémon and 3 classes. Expansions can be made if the demand is high. The pdf is 62 pages and comes with a dungeon to start your adventure.

The Official Spanish Translation of the Unofficial Pokemon Dungeon Crawler is here! You can download either (or both) versions when you download the game. Translation was done by Helena Real (@heylenareal).

Wonderful game! I'm creating a pointcrawl of Kanto region to run it and posting the work on my blog. Here the first post (ita): https://calderonedeltroll.blogspot.com/2022/11/pokemon-dungeon-crawler-merita-un...

Haven't had a chance to check but can this be run solo?

I love this game. It's comfy and easy to play!

Hi, I'm Meli and today we'll be playing live on twitch on our channel rerolldxd, in case you haven't dared to play it yet, join us and discover what you can do with this wonderful system. I also designed some character sheets and would like to share them with you. Thank you <3 Character Sheet example (editable soon)

Hi! I'm trying to figure out how combat works in more detail.

Under the rules for statistics, it says making an attack is a STR roll, and dodging is a DEX roll. Does it take an action to dodge, or do you automatically try to dodge any incoming attack? Does this apply to weapon attacks only, or moves as well?

Thank you for reading!

Just discovered this today - haven't even gotten a chance to play it yet but as a huge Pokemon fan I'm already in love. I would love to see an expansion for this game that adds more Pokemon, moves, items and classes, but for now, I've tried my hand at some homebrew content, making the three Johto starters as playable Pokemon. I hope you enjoy! Keep up the good work!

Thanks! We need more homebrew, as I doubt we'll get an update soon.

An amazing game system that is an absolute joy to both run and play. The system is easy for the beginner but workable for the experienced roleplayer itching for combat crunching. There's enough flexibility from the source to run a fun/goofy/light game, or a darker story focused on the more bloody elements of dungeon crawlers. There's plenty of room to expand upon the world while still keeping to the heart of the PDC lore itself.

Legitimately a delightful ride - I had a great time running a one-shot, and am looking forward to full game campaigns next. I will be eagerly watching for the possible additions to the game - new items, added generations... Batts has created an incredibly fluid and fun system. Do not hesitate- give it a shot. It's a ton of fun.

Thank you for explaining the hooks in this game! I'm not sure how many other previews and reviews I've seen of this game that were never able to explain anything aside from this game is a dungeon crawler. (Hello dungeon crawling is in the title!) Anyways I can finally get off the fence now and finally get the game. I knew it was up to my alley!

It's a really fun game, really smooth system. Only snags we came across are how attaching berries works and the lack of a character sheet. 20 pokemon is a ton of options so there's plenty for players to dig through too.

I'd also like an explanation on berries, I don't really understand how they are aupposed to work. And how clerics use them.

Yo this looks RAD!
Hopefully I'll dm a one shot dungeon this week.
Would you be interested in a PT-BR translation? I'll be happy to do it
cheers

That would be amazing! How can I help you with it?

A plain text version is all i need.
I'll dm u on twitter

Do you have a Character Sheet for this?

Not yet! Might add one in the first big update.

Please let me know. My TTRPG group is super excited to play a Pokemon Dungeon Crawler. I am looking forward to this update.

Will we still get a big update?

I like the idea behind this a lot! Not gonna lie, though, Megahorn being a sound based move when it's normally a bug horn attack kinda irks me.

Also, including Tangela as a playable character is really awesome. I hope you add his evolution Tanglegrowth in the next update.

Keep up the good work!

This is AMAZING! Would you be interested in doing a Spanish version of it? I'd be glad to help you with the translation for free ;)

Hey! I'd love to. What would you need from me to help get it done?

Thanks for replying and Happy New Year!

If you could send me a "plain text" version (a doc with headings, for example), I could translate it more easily, send it back to you, and then you can do the layout.

I don't know if we can send PMs here, but my email is farealh (a) gmail if you want to get in touch there ;)

I'll get that sent over to you today!

Pokemon Dungeon Crawler is a glorious low-fi homage to both Pokemon and old-school dungeon crawlers.

It's 62 pages, with classic art from Red & Blue and a layout style that's reminiscent of old Game Boy text.

Content-wise, PDC feels very faithful to the playful, curious spirit of Red & Blue, but it's also got lore elements similar to Mystery Dungeon. I'm a casual fan, but I think fans who are deeper into the material will also have a great time here.

Mechanics-wise, PDC is D20, and I think the D20 engine really works for the cozy, crunchy, retro thing it has going. I also think it's one of the best, if not *the* best, adaptation of Pokemon to a gaming engine that I've seen (the other candidate being Pokethulhu.) Pokemon is hard to adapt, and it tends to either get bloated with complexity or simplified until it loses its flavor, but PDC deftly threads the needle between those two outcomes.

PDC also adapts things in ways I wouldn't have anticipated. For example, evolutions for all pokemon are now stone-based, and confer an additional Move. Moves use PP, which I would've liked to see tied to Class, but which everyone has a default pool of. Instead of using Moves, you can also just regular attack with equipment, so Moves are closer to spell slots rather than a depletable survival horror resource.

The PDF is quite full of content, and it includes TM/HMs, setting hints, a full adventure, a bestiary, equipment, and a some advice both for GMing and for GMing this game specifically. It's not 100% comprehensive, but it is absolutely enough material to play with, and there's a clear road map for how to add your own content if you want to.

Overall, this is a treasure, and it's free. So given the, ah, parent corporation's American branch's history with well-intentioned fan projects, I'd suggest snapping it up while you can. And also writing fan material if that's allowed. Maybe there's a herd defense we can do to protect this thing.

Everything seems to flow nicely very impressed. Id love to help write up more for you if you needed help

You should write up an adventure or something and post it on itch!

The combination of classes with pokemon and classic "backpack" style kits is slick. The Cha based pokemon are probably my favorite.

Yeah, I think Pika is my favorite so far. I hope to be able to do the gen II pokemon soon.

where is garbodor batts

In like Gen IV or something. I gotta finish Gen I first lmao. 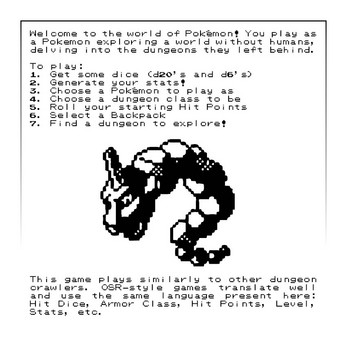 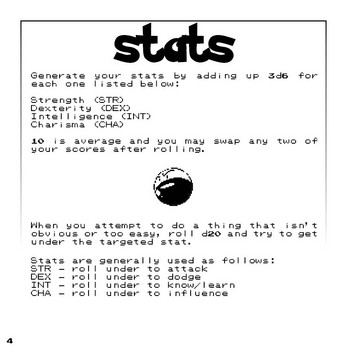 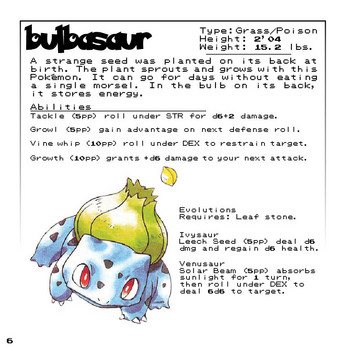 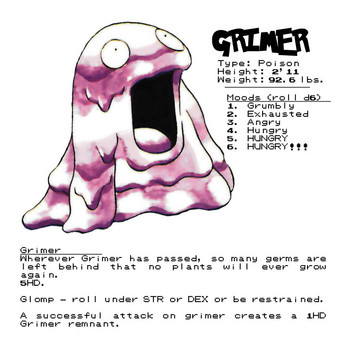