Blackbirds is something I've been working on for several years. It started with Songbirds, which some of you might recall. It was on Drivethru, had different art, was based on Into the Odd. Then it continued into the Songbirds that's here on itch, all pink, new system, new ideas. And it even went into Vultures, which was totally different, but still was me fiddling with the idea in my head for an adventure game.

This is the early access of all of that effort coming to fruition. My complete system. The game that comes to mind when I sit and think, "what do I really want in my perfect game?" It's called Blackbirds, because that's what an adventurer is. They plunder the dead areas of the world for scraps. When there's tragedy, they arrive in the hopes of helping. They're always cleaning up the mess.

This is a d20 system where you add modifiers to die rolls trying to beat a difficulty set by the Guide. It's also me doing my best to explain things in a way that is easily understandable. I've never written what I consider a good "intro to ttrpgs" before, but this is my shot at that.

Character creation is all about fitting you with communication tools. It's impossible to be inside the head of the Guide, and in my years of DMing, I've found it easier to communicate the world and the things I'm thinking through in-character dialog. For instance, in Blackbirds:

I'll update this as the game expands.

It's about money, really. Making a book that's 20 pages, full color, is hard already. The more pages you have, the more art you want, the more expensive it gets. And I don't want to rely on kickstarter for this, I'd like to try different avenues. This book is going to have everything I need to run a game, which means a complete spell list, 100 random potions, and a bunch of other useful things that I'll update this page with when I can. But at this rate it's going to be a thicc book. I'd guess 175 pages? Depends on how much stuff I can put on a page. And that's without art.

Art's the next thing. I'm heavily inspired by a game's art and I want this book to have a very particular vibe, which means paying Sam Mameli to do way too much art. Over all, any money raised while in early access will go to Sam to get more art.

I'm project managing the NERVES zine for no pay because it's a passion project that I think the industry needs. I'm fulfilling my friend's Million Islands KS because I want her to succeed, and I'm making a little from that, but that's just to pay for printing and shipping. Basically, February was a rough month money-wise and I'm hoping to bounce back a little bit moving forward.

Well it depends. I'm not making any money on this project at this moment, so I have to work on it when I can in between the things that are keeping me housed. If the funding goal is reached, I can focus on this big time and put all my effort into it. I believe that if this gets the art and I can print it how I want, this will be a successful book. But it requires a little collective crowd funding to succeed.

For now? Infrequent updates and a promise that this project will be complete. I just can't know when.

I can't have a cool progress bar on itch because I'd have to charge for this project now and then put it on sale. Instead I'll update here with the art as the list gets finalized and then the budget gets confirmed. My preliminary number crunching is saying it's easily gonna be 5k. Which is terrifying haha But hey. I have a vision for this and I'm gonna follow through with it.

In order to download this adventure guide you must purchase it at or above the minimum price of $5 USD. You will get access to the following files:

Support this adventure guide at or above a special price point to receive something exclusive.

Since I'm charging for this now, feel free to grab a community copy if you don't have the cash.

I cannot confirm when this project will be ready for printing. But I can guarantee that if you support it with $25 bucks or more, you'll get the hardcover, full color, full art print product when it's done. I have a shop that can handle shipping so we don't have to worry about that until it's time to ship the thing. 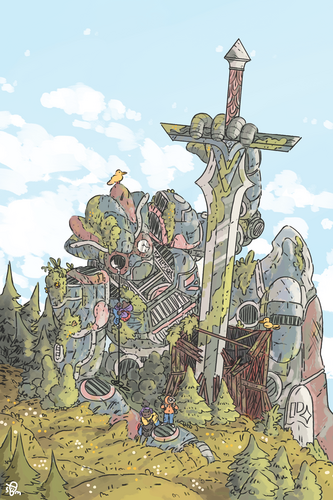